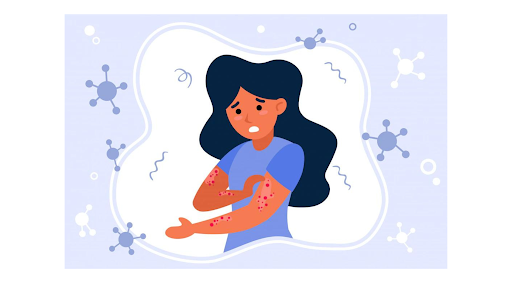 Monkeypox: A rare virus that is rapidly spreading​

Considering that the COVID-19 pandemic is well into its third year, why are we experiencing an outbreak of monkeypox? Has a new virus emerged? How concerned ought we to be? While more information will be received, here are some frequently asked questions’ responses.

Monkeypox is an infection caused by a virus related to smallpox. It is more prevalent in central and western Africa and causes a disease that is comparable to it, albeit typically less severe. More than 50 years ago, it was originally found in experimental monkeys. Other species that carry this virus include some squirrels and African rats.

People can also contract monkeypox from infected animals by being bitten or scratched, cooking and consuming infected meat, or using other infected animal products. Until the rash and blisters have completely healed and a new layer of skin has grown, monkeypox can spread to other people. Usually, the disease lasts between two and four weeks.

Naturally, hearing of a new virus spreading rapidly over the world brings to mind the COVID-19 pandemic’s beginning. However, monkeypox is not a recent discovery; it was first identified in 1958, and a number of characteristics suggest that it is likely to be far less harmful.

What are the symptoms of monkeypox?

Early signs of monkeypox include flu-like symptoms such as:

Also, Monkeypox is characterized by an abrupt, inexplicable rash, as well as headache, fever, chills, chills, muscle and body aches, and swollen lymph nodes. Three to 21 days following exposure to a monkeypox carrier, symptoms may appear. The rash usually begins as flat, red spots on the skin. The rash develops into raised bumps over the course of a few days to a week, followed by blisters that first contain clear fluid and eventually pus. Although they can happen everywhere on the body, they most frequently affect the face, arms, and legs and are typically painful.

Can monkeypox be prevented?

The WHO states that smallpox vaccination protects against monkeypox. For those who have recently been exposed to someone who had the monkeypox, the CDC advises vaccination. Within four days of exposure is the ideal window for vaccination.

“The smallpox vaccine has been proved to protect against monkeypox, but the vaccine itself is not without side effects and can even cause major difficulties,” has been stated by some officials. This is especially true for the same groups of people who are most at risk from monkeypox: immunocompromised and pregnant people. “As a result, each individual decision on vaccination should be made after carefully weighing the risks and benefits.”

These are all precautions you should take if you want to avoid contracting the virus. A caregiver should ideally have received a prior vaccination.

Is there any good news about monkeypox?

Yes. After symptoms appear, monkeypox is typically contagious, which can stop it from spreading. People might transmit COVID-19 before they even realised they had it, which is one reason why it spread so quickly.

Because the virus is difficult to transfer between people, outbreaks tend to be intermittent and small. The good news is that monkeypox is unlikely to start a pandemic, unlike COVID-19’s causative virus, SARS-CoV2. It is less contagious because by the time a person is contagious, they usually already know they are ill.

Monkeypox still poses a minor risk to the public at large.

It’s crucial to be on the lookout for symptoms and to get in touch with your healthcare practitioner if you experience any. Staying at home while ill, donning a mask when coughing or sneezing, frequently washing your hands with soap and water or using an alcohol-based hand sanitizer, and avoiding contact with wild animals, particularly sick or dead ones, are all preventative measures you can take to keep yourself and the community healthy.

Disclaimer: This article is provided for information purposes only and should not be used to diagnose or treat medical conditions. Consult a doctor or other health care professional for medical diagnosis and treatment.